There is a connection between toxicity and disease. In 2010, Drs. Duk Hee Lee and David R Jacobs concluded that obesity alone did not lead to Type 2 diabetes. Persistent organic pollutants (POPs,) namely pesticides, must also be present in the adipose tissue, or fat, for this disease to manifest. (1)


Further, these two doctors did another study which showed that various POPs (BPA, dioxin) found in the blood contributed to the cardiovascular disease. Surprisingly, pollutants had varied effects based on sex. (2)


Many of these toxins are fat-soluble and are therefore stored in the adipose tissue (fat cells.) Their presence can contribute to difficult weight loss and obesity by means of causing insulin resistance. They are also a contributing factor in cancer, infertility, Alzheimer’s disease, coronary heart disease, and fibromyalgia.


Many nutrients are crucial in supporting this process. Glutathione is an antioxidant that will combat the effect of the free radicals produced during Phase I.  One of its building blocks is sulphur which can be found in cabbage, onion, garlic and broccoli. Other nutrients needed during Phase I detoxification are folic acid, found in spinach and orange juice; flavonoids, found in fruits, vegetables, herbs, spices and beans; and for the B vitamins: spinach, asparagus, bell peppers, broccoli, and cabbage.


Phase II nutrients include methionine. Methionine is mainly found in dairy, nuts, and eggs. For anyone on an allergen-free diet, the best food sources include sesame seeds, tahini, sunflower seeds and navy beans. Cystine is another nutrient that can be challenging for someone on an allergen-free diet. It is mainly found in dairy and wheat germ, but can also be obtained by eating poultry and oats. Other food-based components important to Phase II detoxification can be found in the following allergen-free foods: poultry, seaweed, meats, carob, cocoa; many are not included in a vegan diet. 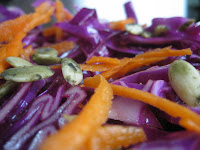 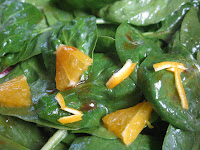 Sometimes supplementation is important, but the best way to absorb nutrients is through fresh foods. Try the Caliente Cabbage Salad (click for recipe) and the Pomegranate Orange Salad Dressing (click for recipe) with fresh spinach as a delicious way to acquire many of the nutrients needed to support liver detoxification.


Eat well and be well,