Evolution of a Chocolate Cake

The evolution started a few years ago. I wanted to celebrate my birthday with a few close friends and decided to introduce them to how one could enjoy food, even with such constraints as making a cake that was wheat/gluten-free, egg-free, dairy-free, soy-free, and nut-free.

After we shared an flavorful meal, it was happy-birthday-to-me time. Everyone knew this was the moment for my culinary expertise to shine. The cake, even without icing, was a hit and they were all amazed at my success.

About six months later, we were going to visit my in-laws and I offered to bring dessert. Trial and error had revealed, that the best way to steer clear of my allergens, was to bring the food which was the biggest temptation, usually dessert. The slightest bump tends to throw me off track and keep me there for quite some time.

That day, there was a surprise guest: a sweet little cutie of an eight-year-old girl. We were fast friends. She had an intelligent wit and most lyrical little laugh. Now my cake was going to have to pass the kid test. At dessert time, her eyes were fixed on the cake. She took her first bite and with the most pitiful look on her face stated, “This is the worst chocolate cake ever.” Stunned and yet relieved by her honesty, I was interested in what she had to say about her experience. She wouldn’t just encourage me because she wanted me to succeed, she would tell the truth. Unfortunately, the adults quietly shushed her. My next bite was taken critically; as someone who had a choice of eating the real deal.

I noticed that the texture was gritty. The taste was a bit bitter. As far as consistency goes, it was undercooked in the middle and overcooked at the edges. I was slightly discouraged and the next time I needed to bake for a crowd, I used a chocolate cake mix from Cherrybrook Kitchen.

It was convenient. I liked that it only made one 9” round layer. This way there wasn’t going to be so much leftover sitting around the house calling out my name in the middle of the night. It baked easily, I cut it in half, iced, and layered it. But in the end, there was something about it that didn’t agree with me.

I don’t tolerate sugar so well. It doesn’t matter if it’s cane juice, cane sugar, brown sugar, etc. It’s just not for me. And usually when I’m cooking for my family, I need to take my father-in-law’s diabetes into consideration. Agave syrup, maple syrup and honey are my sweeteners of choice. I didn’t know it then, but now I know that xanthan gum, which was in the mix, is usually derived from corn. And I don’t tolerate that well either. But if you don’t have a problem with sugar or corn, then read no further and go out buy yourself a Cherrybrook Kitchen cake mix.

Back to the evolution. For a while, I just did without. Then, like it does, my birthday came around again. Since the previous year, I had learned some tricks for allergen-free baking. The most valuable lesson being that small portions are best. I decided to try again with cupcakes.

I’d like to say this attempt was successful, but that is not true. It took one more try with a few small adjustments and I finally came up with something even the harshest critics can enjoy.

So moist, light, and fluffy. 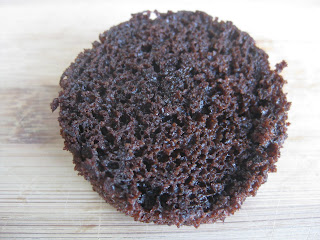 I hope you enjoy it too! 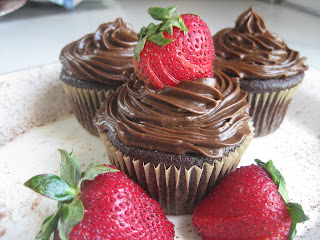