Food colorings have been used as early as 1901 to enhance the marketability of oleomargarine, which would otherwise be grayish in color. Before the 1950s, food colorings were generally derived from other foods. Red would come from beets or cabbage, green was from chlorophyl, and yellow may have come from a variety of spices, such as turmeric or saffron.


But in the post-war economy, chemical companies were looking for ways to maintain business. They set about attracting the food industry by promising consistent color, lower prices, and longer shelf life. At this time, there was little government oversight. "Safety was determined primarily on the amount of a chemical that was needed to kill 50% of the…” test subject “…animals. The data was then extrapolated to humans for assessing risk.”(1)


Several of the original colors have been “delisted” or removed from commercial use. For example, FD&C Red No. 1 was delisted in 1961 since it was found to cause liver cancer. In 1959, FD&C Yellow No. 3 and 4 were shown to cause both liver and bladder cancers in animal experimentation. (2) Thankfully these and other toxic food colorings are off of the market.


In 1965, Dr. Ben F. Feingold, a pioneer in the fields of allergies and immunology made a ground breaking discovery.  By removing certain food preservatives and colorings from the diet of an adult patient, not only were her hives cured, but it also affected a vast improvement in her personality disorder.  Currently, the European Union is planning a ban on Red 40, Yellow 5, Yellow 6, Blue 1, Blue 2, Green 3, Orange B, and Red 3. They are among the food colors associated with hyperactivity. (3)

Recently, I picked up a bag of Pepperidge Farm’s Goldfish Colors and was expecting to read a list of Red this and Yellow that. I was pleasantly surprised to find the colors were derived from natural sources like beet juice and turmeric. A good start to change. There is dye-free ibuprofen in the pain relief aisle of the drug store.  And in the baking aisle of the health food store, you may find vegetable-based food coloring, such as those from India Tree.

I used only two drops of the red in approximately 2 cups of liquid to achieve the color in this Rose Sorbet. 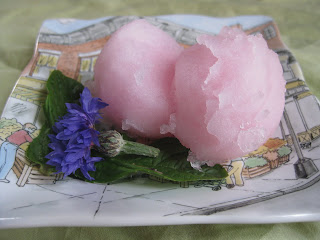 Finding a happy medium between prepackaged convenience foods and making everything from scratch is possible. Understanding the source and long-term impact of what goes into your body is important to your health and the health of those around you. This link to a list of food additives found at Wikipedia will help you get started. Just remember the computer programer’s acronym “GIGO” - Garbage In, Garbage Out.